I was recently a tourist in Berlin for just a week.  Of course I took hundreds of photos, as I always do, and as all tourists do.

This, my first post on the Berlin topic is focusing on some of Berlin’s numerous memorials, museums and other history related installations that remember with courageous honesty, the stories of terrible events that destroyed so many lives, particularly in the early 20th century.

Below are some photos showing images from Berlin’s East Side Gallery. After the collapse of the Berlin Wall, a long section of the  remainder of the structure was utilised as a surface for murals of artists from all over the world. Millions of tourists pass this way every year, to remember, to take photos, to take selfies, to hope for the future. 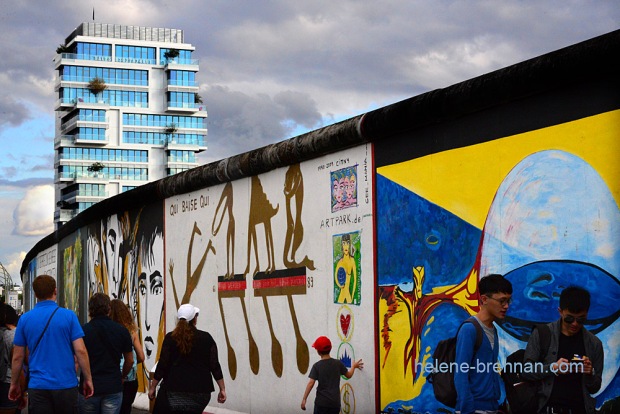 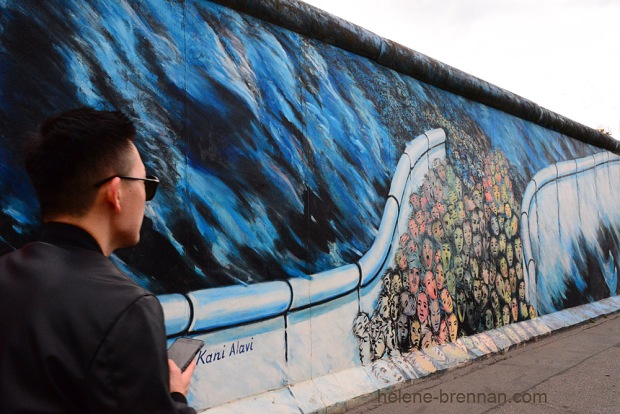 The Holocaust Memorial, below. 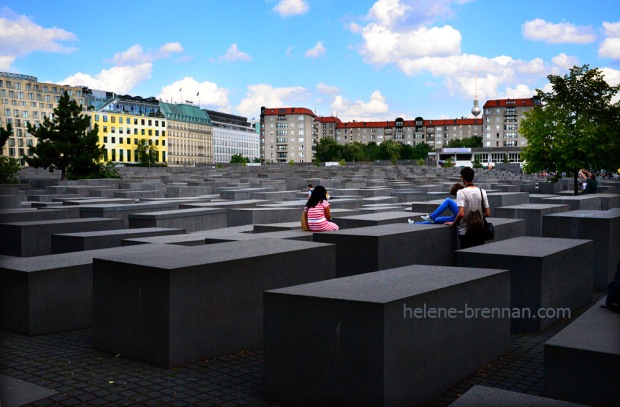 Above is the Holocaust Memorial, designed by New York Architect Peter Eisenman. The site covers 19,000 square meter’s, with 2711 concrete slabs, set on a slightly sloping and uneven site. There is also has an information centre underground.  Adults wander, reflect and contemplate, while children do what children do and generally play hide and seek around the slabs. 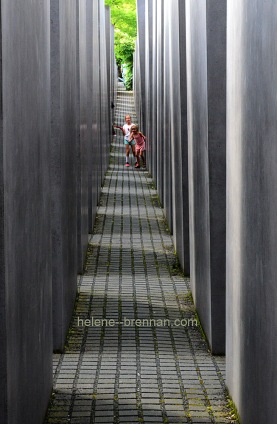 The Jewish museum, above, is a very innovative building with an unusual zigzag shape when seen from above, and it has narrow diagonal windows. It was designed by Daniel Libeskind. More information about the building can be found on https://www.jmberlin.de/en/libeskind-building.

The photo below shows a room inside the building.

Outside, at the museum there is a Garden of Exile and Emigration, which is reminiscent of the Holocaust Memorial, and where children also play enthusiastically, and perhaps inappropriately. 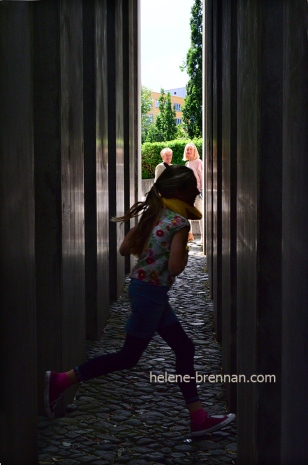 The brass tiles (Stolperstein) that can be seen embedded into the pavements all over Berlin each remember the name and life dates of a Jewish person who lived or worked in the adjacent house before falling victim to Nazi Extermination or persecution. This inspirational Stolperstein art project was initiated by the German artist Gunter Demnig in 1992, and is still ongoing. 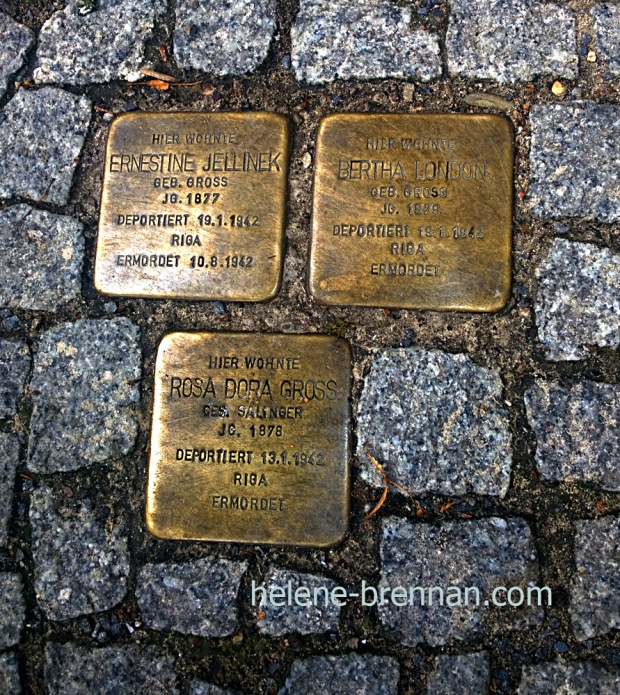 Pondering and reflecting at the Sinti Memorial (above). This was constructed to remember the ethnic cleansing at the hands of the Nazis, of some 220,000 – 500,000 Sinti and Roma people. It’s a beautiful tranquil memorial designed by the Israeli artist Dani Karavan. 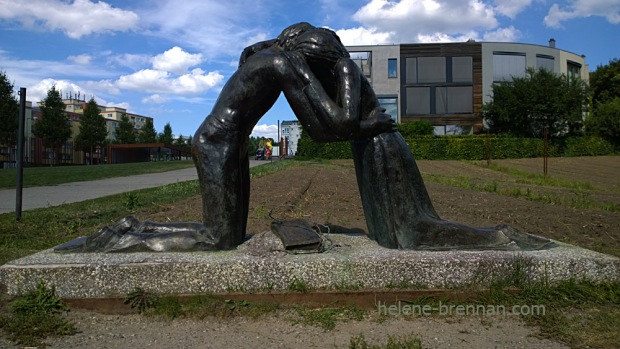 This sculpture, “Reconciliation” was created by Josefina de Vasconcellos following the devastation of the Second World War. It is located at the modern Chapel of Reconciliation, which replaces the original structure. There are copies of this sculpture at Coventry Cathedral, in the  Hiroshima Peace Museum, and in the former border strip at the Berlin Wall. 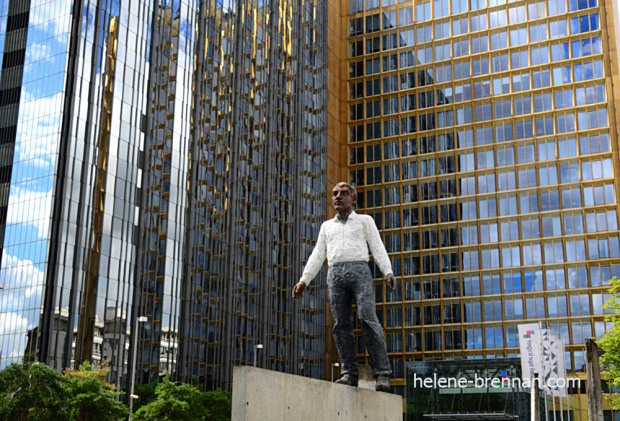 The sculpture above, “Balancing Act” at the Axel Springer Building was created to commemorate 50 years after the laying of the foundation stone for the building, and 20 years after the fall of the Berlin Wall. Stephan Balkenhol was the sculptor. Axel Springer SE is the largest digital publishing house in Europe.

Below is the famous landmark Checkpoint Charlie, the best known checkpoint between East and West Germany, before the collapse of the Berlin Wall. It is located on the corner of Friedrichstrasse and Zimmerstrasse. Now a major tourist attraction, thousands, if not millions of tourists flock to see this place and have their photos taken with the ‘guards’ who will charge €3 for the privilege. The hut is a replica of the original which is now on display at The Allied Museum in Berlin. 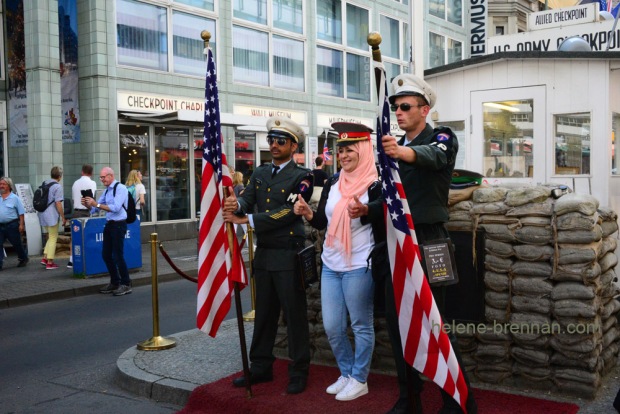 Below is the famous Brandenburg Gate, an 18th-century neoclassical monument in Berlin,  built on the orders of  the Prussian King Friedrich Wilhelm II. When the Berlin Wall was built in 1961, the gate became part of the wall between East and West, and it was closed. Now a major tourist attraction and a symbol of freedom for many Germans.

Thanks for looking at my first post on Berlin. I hope to post more on this city shortly, which will focus on some of the many interesting buildings in the city. Please come back.

There are many more photos of Berlin on my website. Please take a look:

2 thoughts on “BERLIN – MEMORIALS AND MEMORIES”