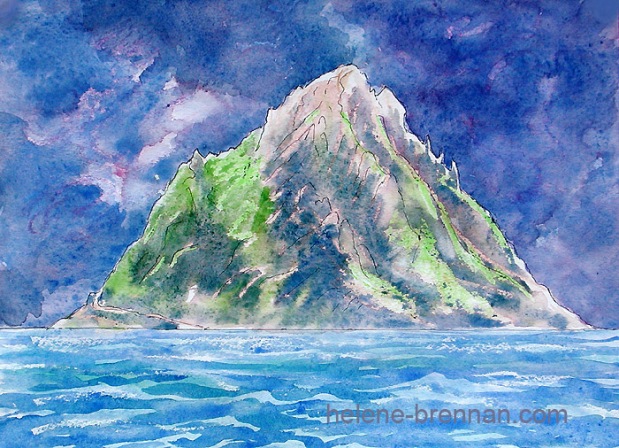 Above is a watercolour painting of Skellig Michael, where much of the Star Wars film, The Force Awakens was filmed in 2015.

I have previously written about the film Ryan’s Daughter, which was largely shot on the Dingle Peninsula, and how it brought the beauty of the place to the attention of the world and stimulated the tourism industry in the area.

Not only tourism was stimulated, several other movies followed, which were also partly shot in County Kerry. Here is a list of some movies shot in Kerry since Ryan’s Daughter:

Harry Potter and the Half-blood Prince (2009)

The most recent Star Wars movie – The Last Jedi was partly shot on Sybil Head (Ceann Sibéal) on the stunning Dingle Peninsula. 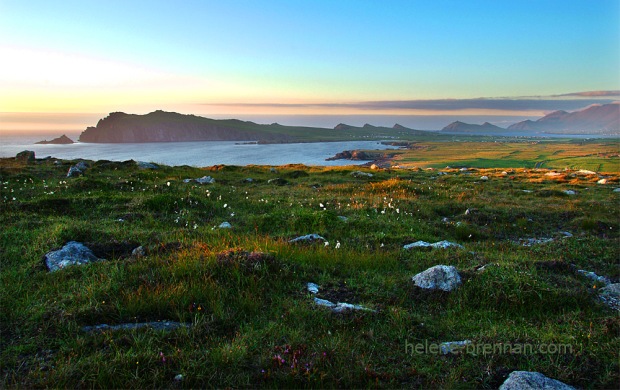 Sybil Head, is a majestically beautiful place, having a commanding, yet magical presence, adjacent to a collection of other stunning iconic landmarks to be seen from the roadside of the famous Slea Head Drive from Dingle. 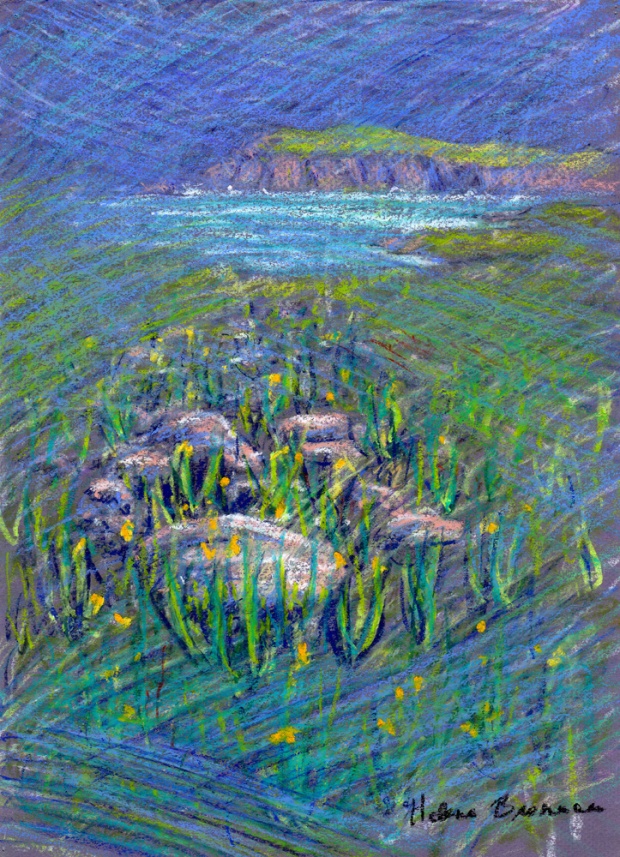 Sybil Head in a Storm oil pastels, above.

Sybil Head from Cruach Mharhain above.

The Force Awakens was partly shot at Skellig Michael, a World Heritage site, off the coast of the Iveragh Peninsula, South Kerry, amid much controversy regarding the damage they may do to the ecology and the antiquities on the island.

The Skellig Rocks are two rather spectacular looking tall craggy rocks rising up from the Wild Atlantic Ocean; there is also a third but smaller rock known as The Lemon. Skellig Michael, or Great Skellig, 714 feet tall, is an ancient monastic site where in the sixth to eighth centuries AD, a community of monks built their monastery – a number of beehive shaped stone dwellings and oratories, and lived their lives there, in considerable hardship and isolation 12 miles from the mainland of Ireland. 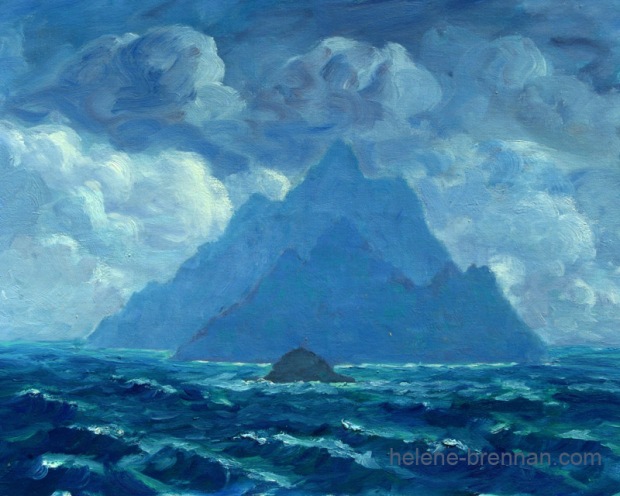 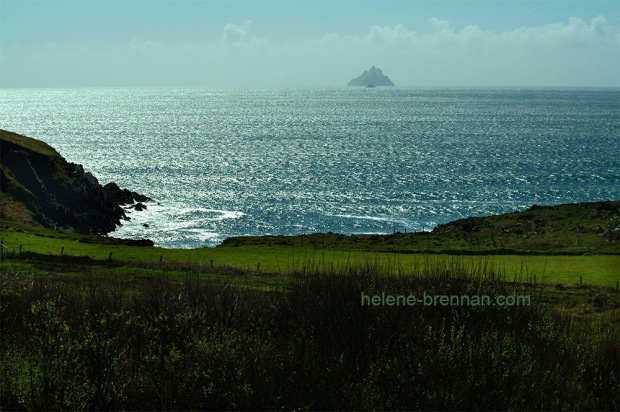 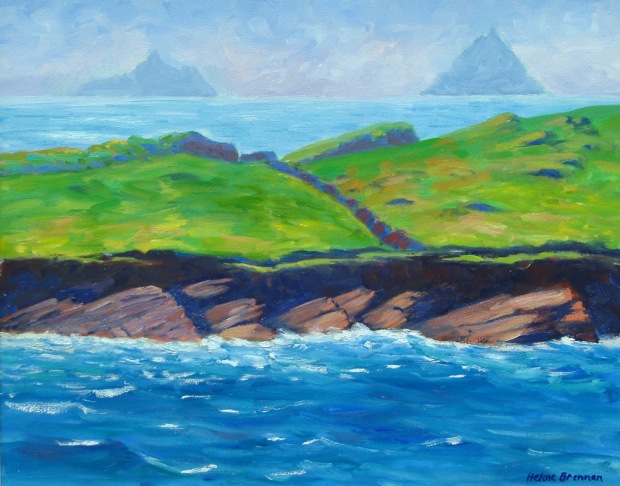 Skellig Rocks, oil on canvas, above.

I have a number of paintings and photos of these famous and spectacular landmarks. Please click the images to see more information about any of them

To help you locate these peninsulas: The south west of Ireland has three magnificently beautiful peninsulas. Two of them are in County Kerry – the Dingle Peninsula, and the Iveragh Peninsula (Ring of Kerry), going south, and the most southerly one is in County Cork – the Beara Peninsula (West Cork).

More information can be found on:

Thank you for visiting my blog. 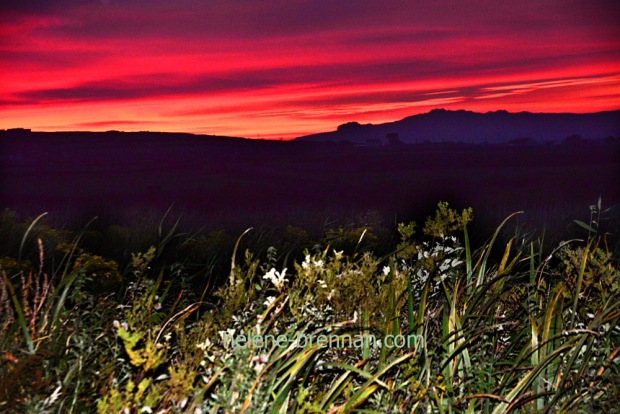 Last night, I happened to suddenly look up from my task on the computer and saw a spectacularly red sky. Naturally, I grabbed my camera and ran out to capture some of  this amazing event. After hurriedly capturing about 20 images – or so I thought – I discovered to my great annoyance and disappointment that I had forgotten to return the memory card to the camera, and not one image had been recorded. So, I raced back to get the card and out again to catch something before this marvellous phenomenon disappeared altogether. Of course I missed the best of it, but in spite of my rush I managed to get several images that give some flavour of the brilliance of the colour of the sky.

The location is Ballyferriter, DIngle Peninsula, County Kerry, Ireland. The rocky ridge of Sybil Head (Ceann Sibéal) is visible on the skyline.

No edits were made to the colours, just minor changes using levels.

Please visit my website http://helene-brennan.com/c25-dingle-peninsula-photos for more photos of the Dingle Peninsula 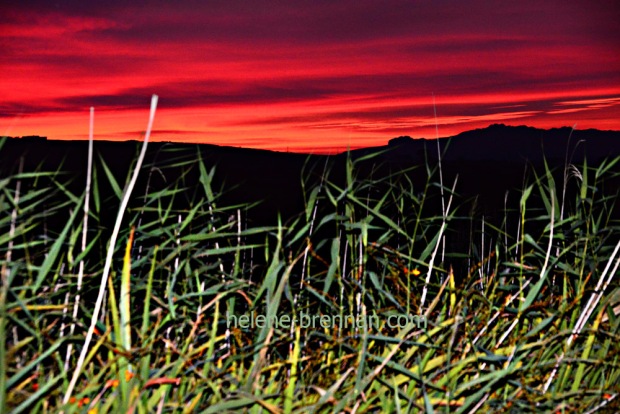 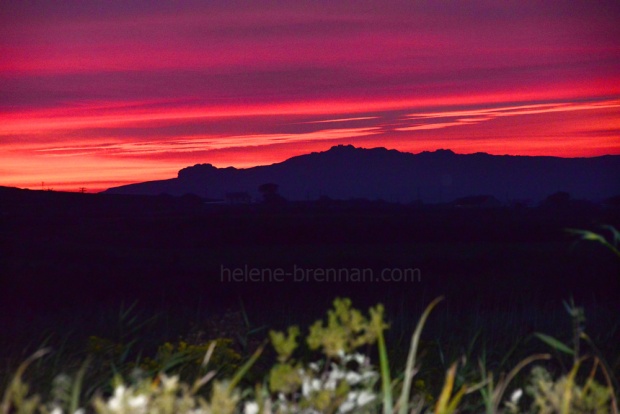