I will keep this post really simple after a frustrating weekend of making several attempts at a post that kept disappearing – or most of it. Something definitely wrong with WordPress this weekend.

So after playing a few tunes in a pub session tonight I have resurrected a draft I started some time ago.

It’s about  the inspiration provided to designers by the wonderful shapes and patterns of the ocean. I particularly remember the famous fashion designer Don O’Neill from Ballyheigue, Co. Kerry (now in New York) describing how he was so influenced by his experience of the images of the lovely beach of Ballyheigue on his doorstep. 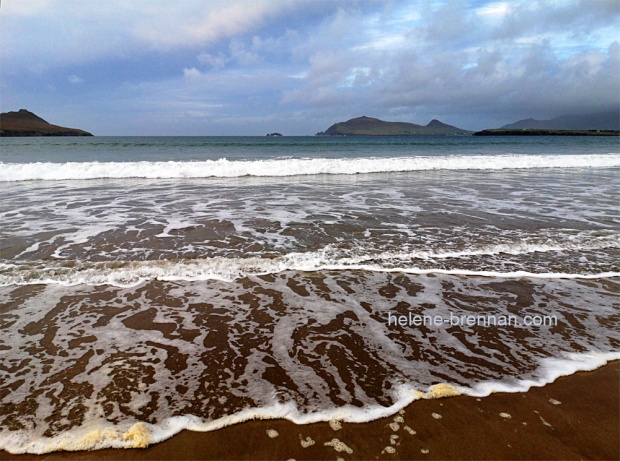 Can’t you just see the delicate lacy patterns on the waves washing to he shore. Also, with felt and fur edging.

That’s all, I wonder if this one will save and publish OK.

Thanks for looking. Please come back.

These are quite large paintings. Oil on canvas, 150 x 100 cms (60 x 40 inches approximately), inspired by the wonderful coastal imagery of the Dingle Peninsula, South West Ireland.

I think that large paintings are difficult to show sympathetically on a website. The larger the painting, the greater the reduction of the image. This has the effect of making the image look much more tightly painted than it is in reality. It’s always worth bearing that in mind when viewing paintings on the internet. These here can be viewed much larger if you click them, and you may still be able to open out the image and see the style of the brush-marks more clearly, and be able to evaluate the freedom of the style or the discipline that is employed.

I have been sitting on these for several months, in a manner of speaking. This is the first time I have shown them on my blog. They are on my website on this page:

I needed to wait for at least 6 months before applying varnish. Many painters are not aware of the need to wait and may apply the varnish too soon. As yet most of these are not varnished, except the one I have sold (Blasket Islands).

The purpose of varnish is to protect the picture, but if it is applied too soon it fuses into the paint below, and cannot in the future be removed if desired. It might never need to be removed in the life of the picture, but it’s best to follow good practice, as the varnish yellows with age.

Some painters think it’s best to not use varnish at all, as it can create problems of its own. Large paintings in particular are difficult to varnish evenly. It’s not strictly necessary to varnish, and many painters use an oiling out technique to bring up the colours and create an even sheen on the picture. I sometimes do this myself. An oil painting, once completely dry will have a washable surface and as long as it is kept in a clean unpolluted environment there should be no real problems. Most people do not now smoke inside their homes, and this has removed the main polluting agent in one’s home. 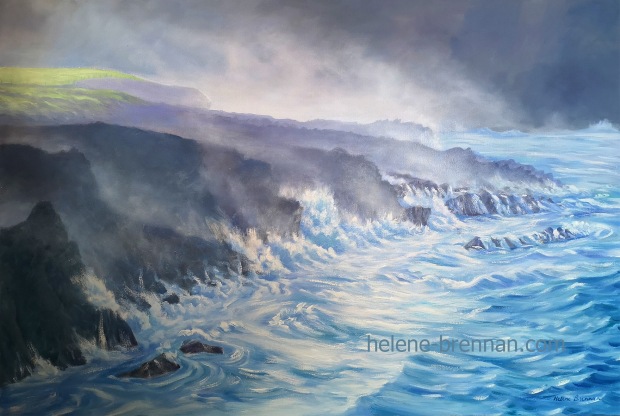 Rushing Wave in the Wind 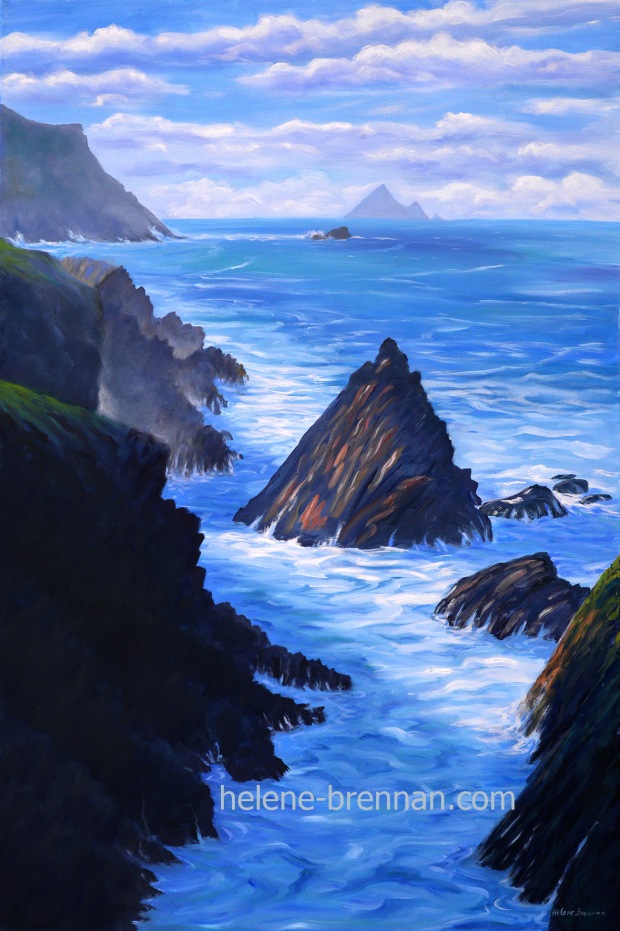 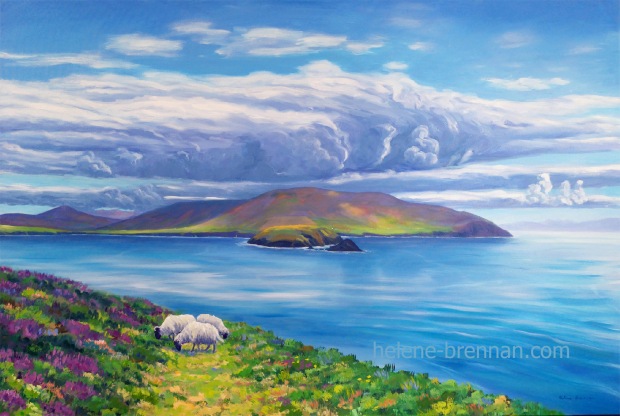 I would be delighted to respond to any questions that anyone would have. Please enquire through my website.

For those of you who might be in my area, I have a gallery, showing these large paintings and several smaller paintings. Here is the big paintings room. Directions on Google. I look forward to meeting you. 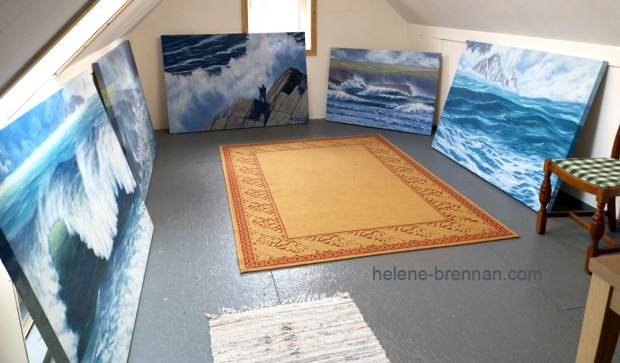 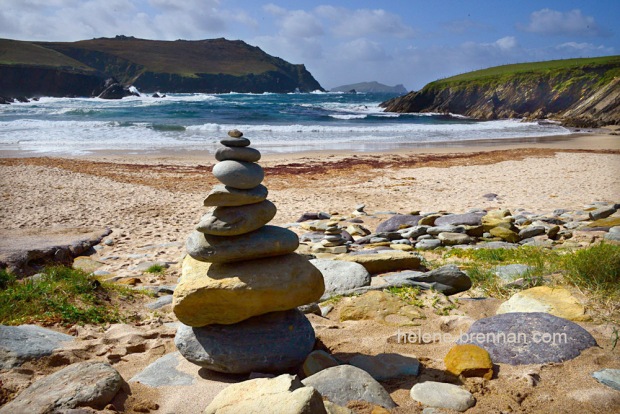 Often while beach walking, I come across the remnants of a day’s fun on the beach. The children (or adults, in some cases) have gone home, leaving their creations for the tide and the wind. I enjoy imagining the fun that was had in these acts of creativity. 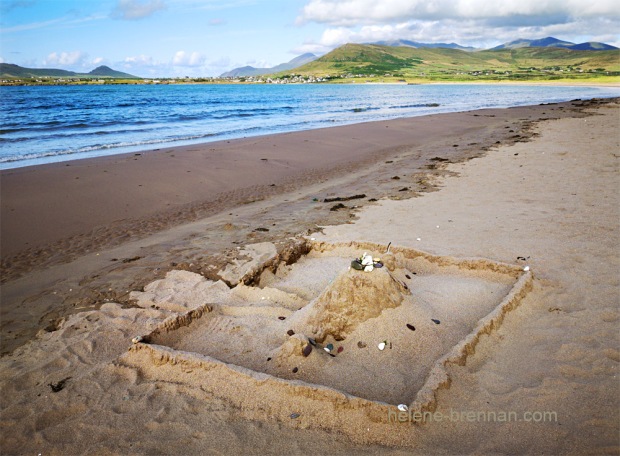 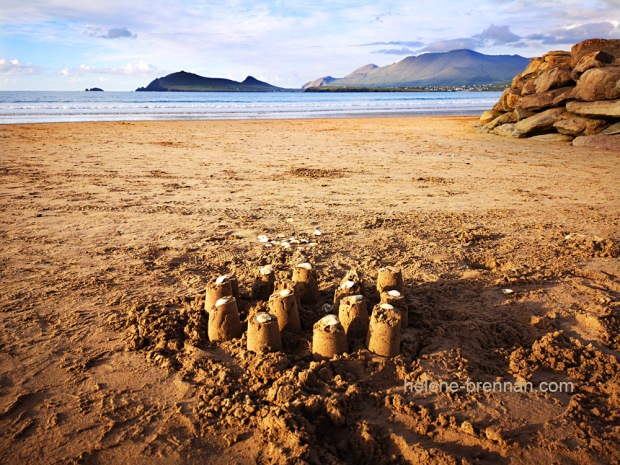 Thanks for viewing. If you have enjoyed my photos, check out Dingle Peninsula photos and more on my website:

Now and again I revisit this offering of nature, take photos and with only simple editing, reveal the wonderful delicacy and dreamlike images of these patterns in the sand created by the retreating tide. Nuff said. Please enjoy the images. 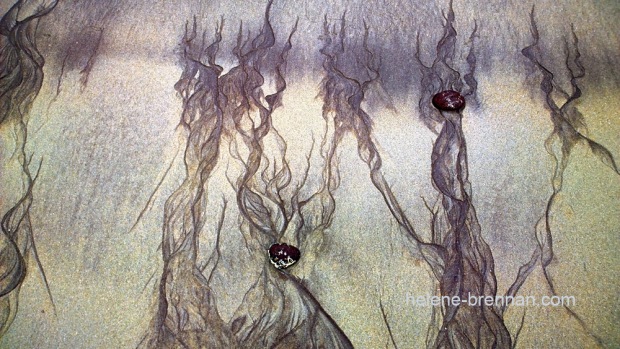 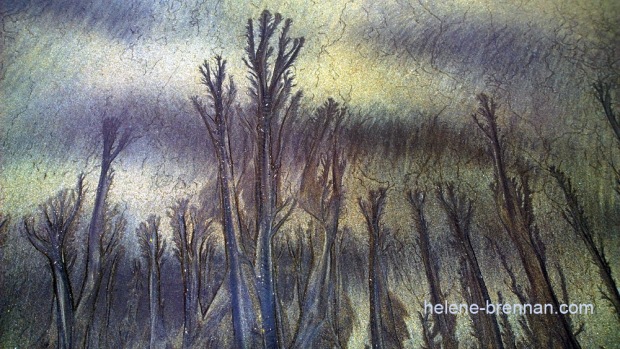 For more of these images, please visit my sand paintings page on my website:

Berlin is awash with all sorts of creativity. These photos show just a few of the images I captured in my opportunist moments as a tourist. I have little or no information about some of them, but they caught my attention.

Below is a sculptural installation Rolling Horse on the northern terrace of  the amazing Central Station.  It  was designed by the German sculptor Jürgen Goertz.

The Oberbaum Bridge, above. It’s a double deck bridge that links Friedrichshain and Kreuzberg, boroughs that were divided by the Berlin Wall, and it has become an important symbol of Berlin’s unity. The photo below shows a train passing over the bridge. It’s 124 meters long. I have read that the design of the bridge has been credited to Santiago Calatrava and opened in 1896.  But Santiago Calatrava wasn’t born until 1951 – so I’m confused about that!

Above and below are two examples of several murals along Schloss Strasse, depicting events of history  – on the way up to Charlottenburg Palace.

Below, the top of the Brandenburg Gate, as a more modern type of air transport passes above.

I couldn’t let this colourful car pass without grabbing a shot. As for the one below – more fun than art, but I had to capture it.  Several of them passed by, with grown up drivers.

Below are photos of chance discoveries as I explored the city. 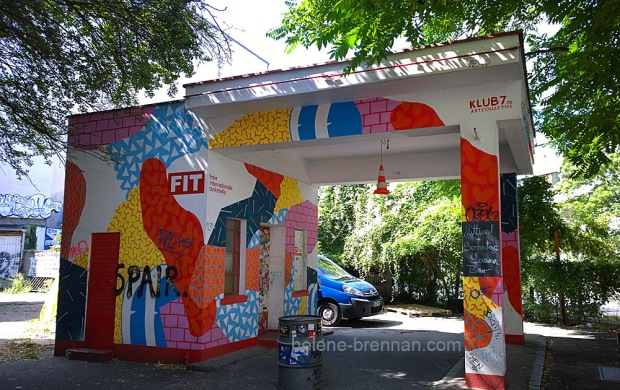 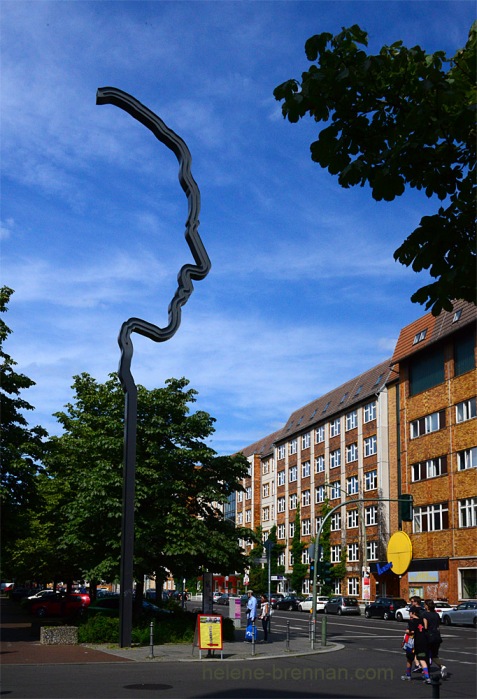 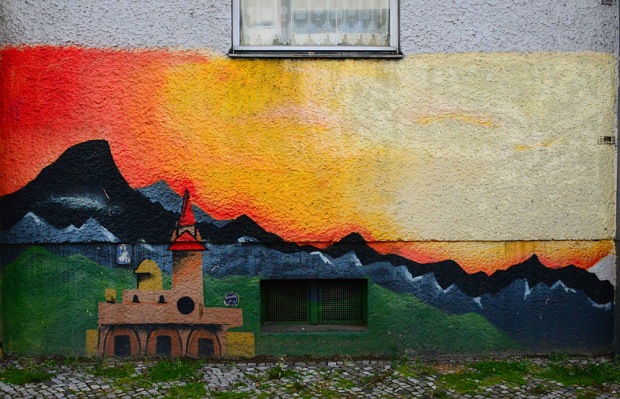 Music by the River Spree, above. 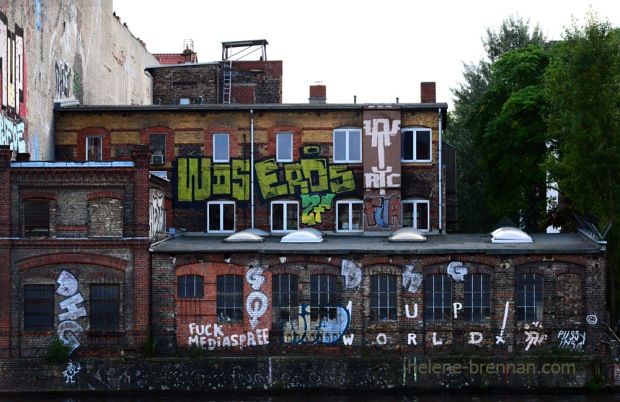 Graffiti,  by the River Spree. There is a lot of graffiti in Berlin, some of it interesting and artful, but much of it is defacing other art objects, as in other examples shown in this post, above and below. 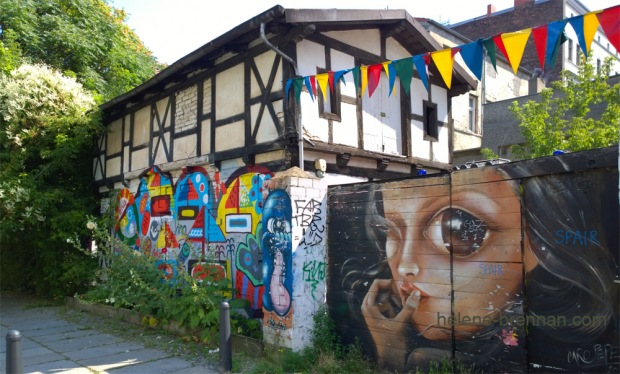 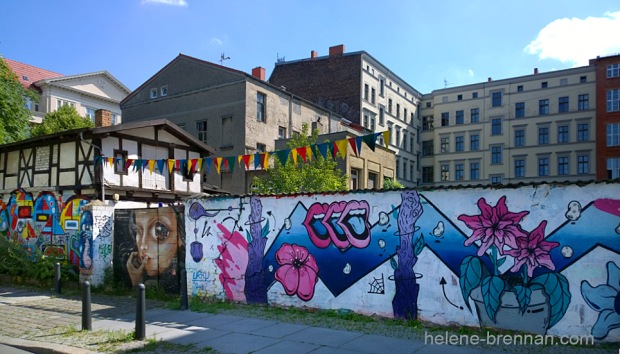 This one above and one below are examples of murals on the old Berlin Wall, or “The East Side Gallery”, as I have described in my first Berlin post. 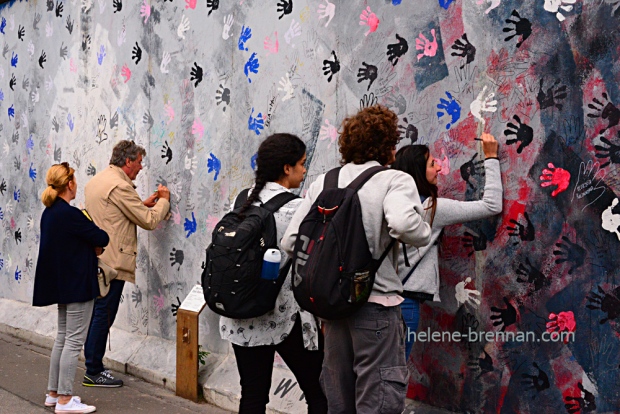 This one above appeared to be inviting people to make their own mark. 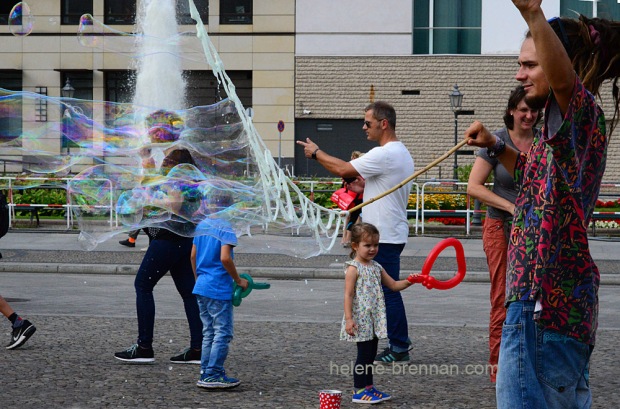 Bubbles in Berlin, above; a little fun by the Brandenburg Gate.

I really wanted to go up in this balloon, which would have given wonderful views of the city, but after queuing up for some time I was to be disappointed – out of service for some reason!

I have several more photos, this is just a small section of them. I hope you have enjoyed looking at them.